129: Cookus Interruptus: This Is Not My Real Family

129: Cookus Interruptus: This Is Not My Real Family

Cookus Interruptus—how to cook fresh, local, organic, whole foods despite life’s interruptions! This episode will feature an intro by Cynthia Lair, an inside scoop on the show, fun foody stories, and tasty clips from of Cynthia’s favorite episodes of Cookus Interruptus.

With a background in acting and an education in nutrition, it was natural for Cynthia to invent the online cooking show Cookus Interruptus, which launched in 2008. In more than 175 videos, members from The EDGE Improv group twist healthy cooking instruction and the family sit-com genre into educational entertainment. 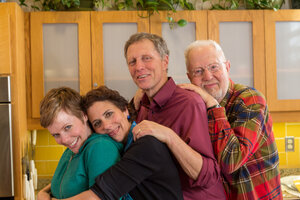 Cynthia has written three cookbooks, given a TEDx talk on How to Cut an Onion, and performs improvisational comedy regularly. She has been on faculty at Bastyr University since 1994 and was the founder of Bastyr’s Bachelor of Science in Nutrition & Culinary Arts degree program.

Her latest book, Sourdough on the Rise: How to Confidently Make Whole Grain Sourdough Breads at Home (Sasquatch Books) was released October 2019.

The fourth edition of Feeding the Whole Family (over 80,000 copies sold) from Sasquatch Books arrived in 2016. It is fully-revised with 45 new recipes. A cheerful-looking second edition of Feeding the Young Athlete: Sports Nutrition Made Easy for Players, Parents and Coaches was released in 2012 by Seattle publisher Readers to Eaters. Visit Cynthia online at cynthialair.com.